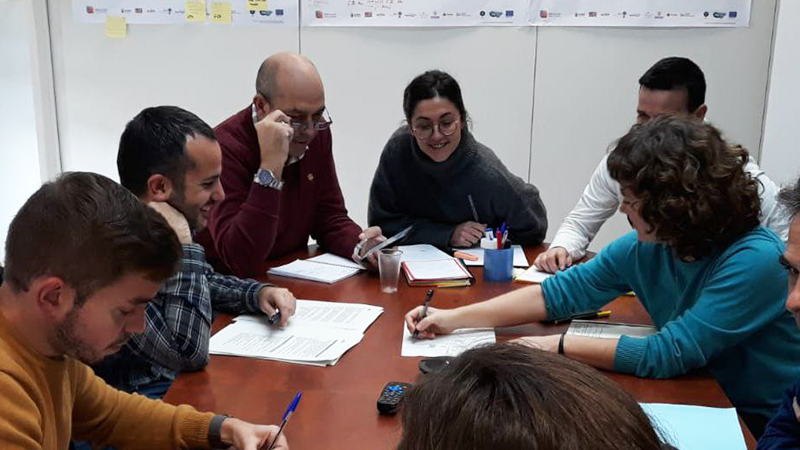 Getafe is working on an energy community to tackle energy poverty

This last week we visited Getafe, where its city council and the Empresa Municipal de Suelo y Vivienda (EMSV) are working alongside one of the technical aids that were provided by the Energy Poverty Advisory Hub (EPAH). Their main goal is to develop an energy community model which focuses on tackling energy poverty and improving social structure. 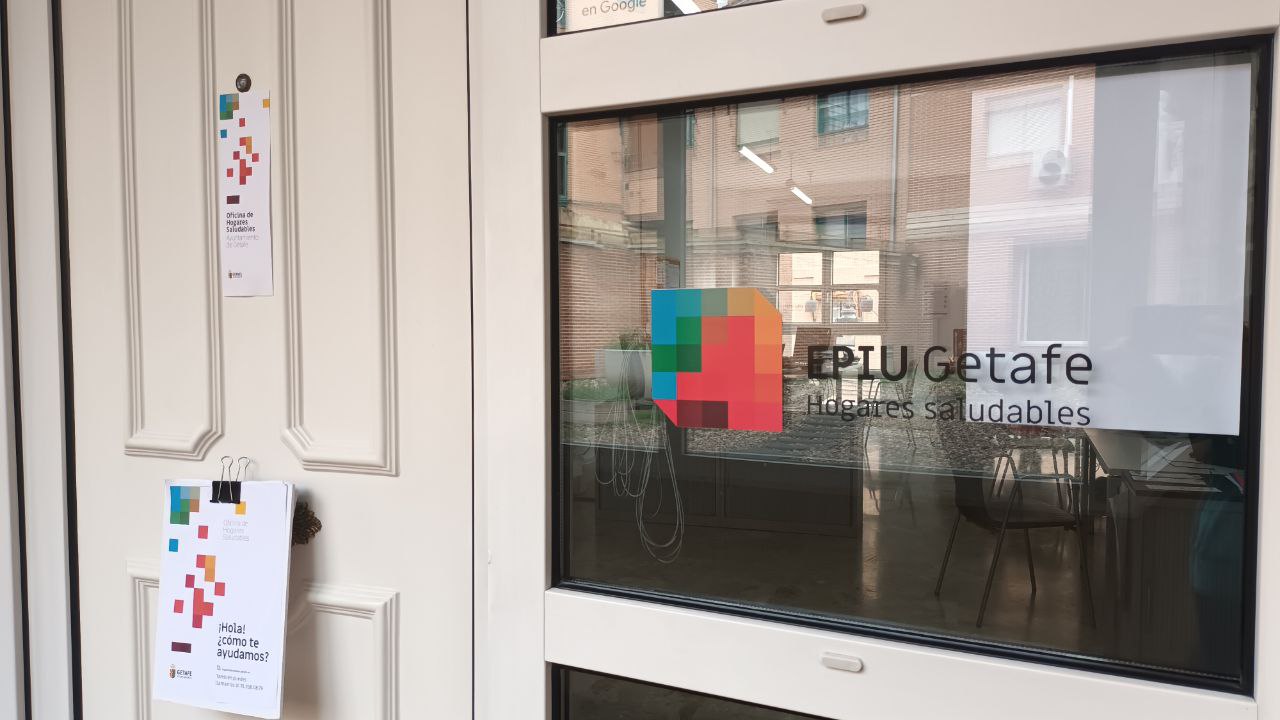 Ecooo, a non-profit cooperative which specialises on renewable energy and self-consumption, was chosen by EPAH to accompany this project in Getafe.

Getafe’s council is working on constructing two solar photovoltaic facilities in two local rooftops located in Las Margaritas and La Alhóndiga districts. These facilities will generate renewable energy, which will be shared with vulnerable families. Creating an energy community that manages both plants and other community energy services is also intended.

Taking these goals into consideration, throughout the duration of EPAH’s technical assistance (9 months), a potentially replicable energy community model will be developed, both in Getafe and other municipalities.

A glimpse at the EPIU project

The visit starts at the Oficinas de Hogares Saludables (Offices for Healthy Homes), where residents are given professional advice on how to save energy in their homes, as well as how to optimise their bills. These offices are the result of the EPIU European project, which allowed Getafe to develop digital tools to obtain data for locating hidden energy poverty, as well as offering assistance that tailors to the users’ necessities.

Experts from Oficinas de Hogares Saludables explain to us how this service works and how not only do they offer information, but they also intercede with energy providers to resolve conflicts and avoid power cuts. They share the most important aspects in monitoring every case until they solve the problem, as well as their methods for improving a family’s energy situation.

After this meeting, we begin the session about the energy community model. 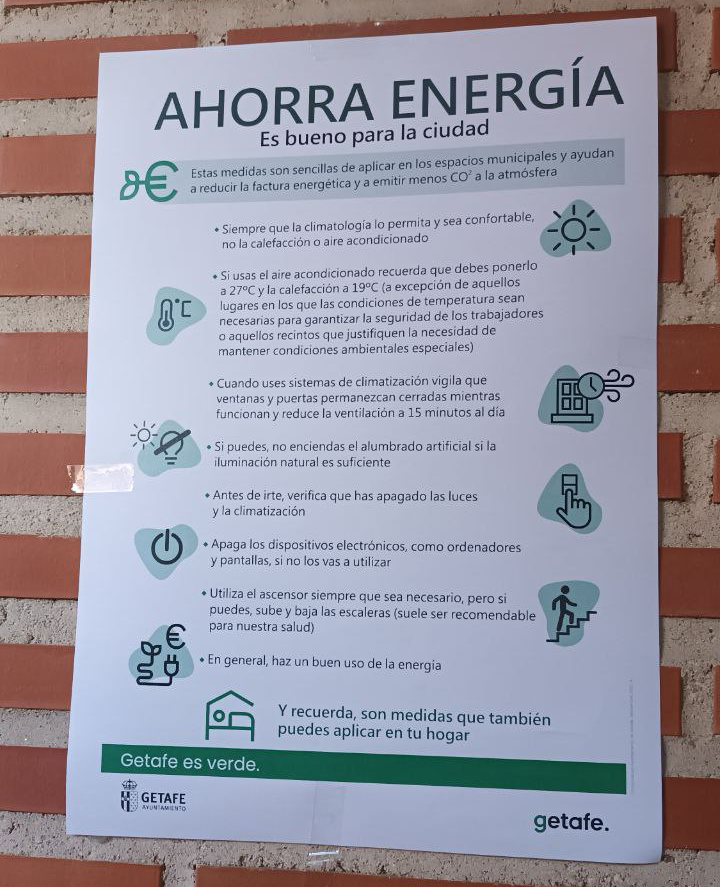 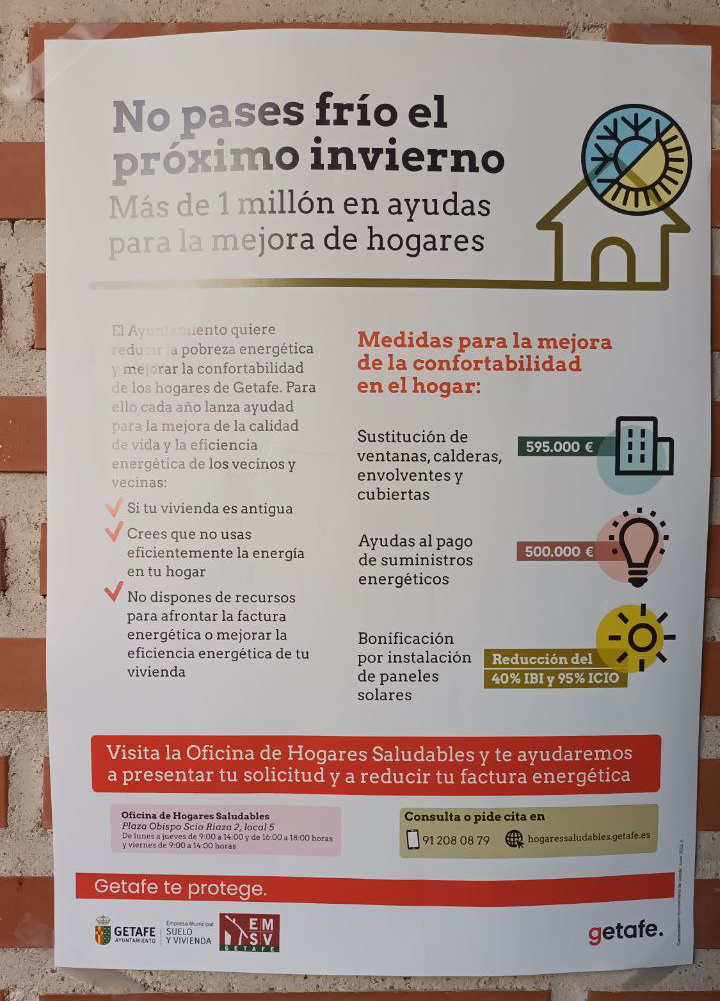 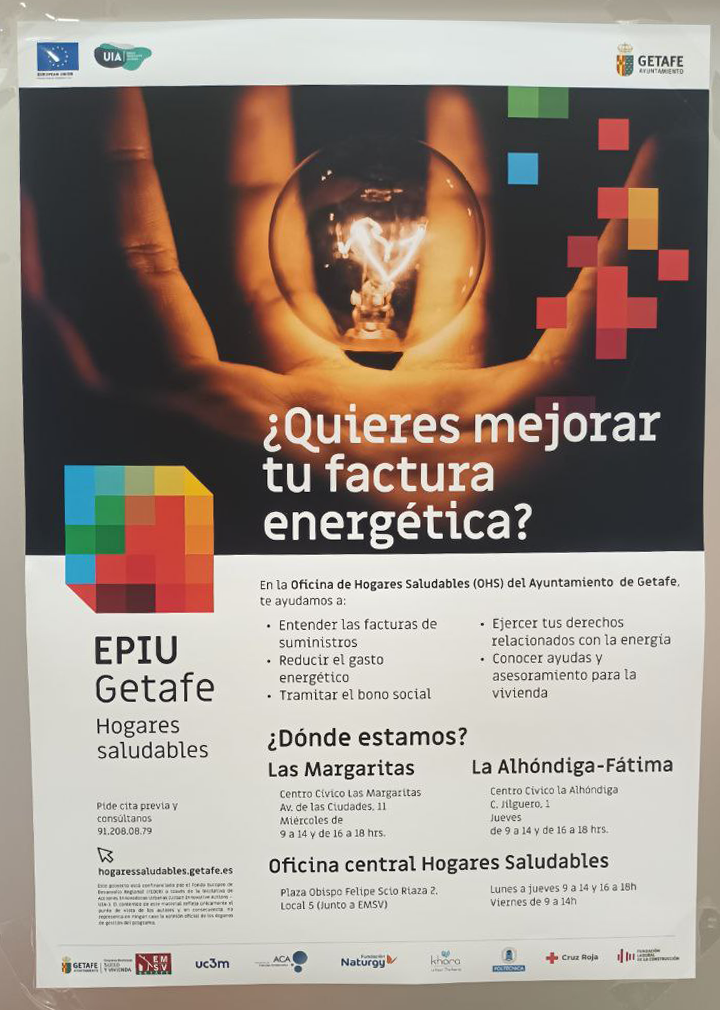 As an aside: Self-Consumption or Energy Communities?

It is important that any council that intends to produce renewable energy in local rooftops to improve energy poverty knows that there are several options. They may develop self-consumption installations, create an energy community or perhaps choose both, depending on their needs and context.

Nowadays, Spain’s self-consumption regulations enable councils to build a solar photovoltaic facility in public rooftops and share its energy with neighbouring residents around 1 (soon-to-be 2) kilometers. This is known as shared self-consumption. This concept is often similar to energy communities, but an energy community may or may not include a self-consumption installation, and may also include many other aspects.

Thus, councils with available space and funding to build photovoltaic plants can already start producing energy and share it with who they deem necessary without creating an energy community.

What does an Energy Community entail?

An energy community requires a community (a group of people and/or organisations that is guided by collective decision-making), a legal body which supports it, as well as, for example, agreements about its goals, means of access and participation, and management.

According to Spain’s legal framework, established in Royal Decree-Law 23/2020, 23rd of July, Renewable Energy Communities are (translated) “legal entities which are based on open and willing participation, autonomous, and managed by associates or members who are close to renewable energy projects which are owned and developed by such legal entities. Their associates or members must be either natural persons, SMEs, or local authorities, including municipalities, and their main purpose must be providing environmental, economical or social benefits to their associates, members, or local areas where they operate, rather than financial gain.”

Therefore, establishing an energy community involves creating or having a legal body at one’s disposal, and then answering numerous questions, and some of them may be complex. In that regard, as long as the Government does not apply these two energy community regulations to Spanish legislation, many questions will be answered without being certain of them being the best way forward. We could say that, currently, energy communities’ main advantage is being eligible for subsidies. Further information can be found in the applications’ regulatory bases, such as IDAE. 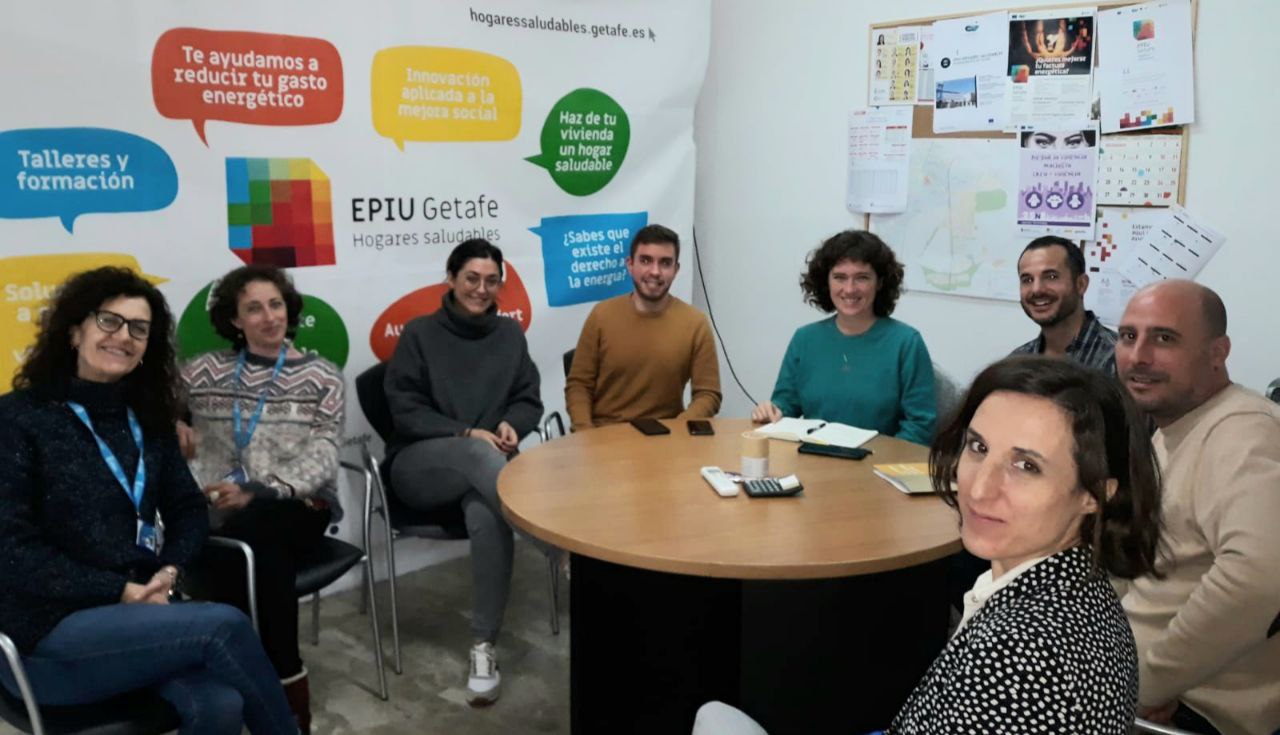 We discuss the project’s draft with experts from Getafe’s Empresa Municipal de Suelo y Vivienda, EPIU, and Ecooo. These are some questions which every energy community project that includes vulnerable families must answer: what legal form is best suited? In that sense, it is important to consider the owner of the facilities, the intended management system and the roles of those who are to be involved. A municipal project must also abide by public procurement regulations.

And then: What are the participation requirements? Will it be open to willing residents? How many people will be able to participate? What percentage of participants will be vulnerable families? Will organisations be able to participate? If done with European funding, will the beneficiaries have to repay such investment? Will there be a registration fee? How much will it cost? How much energy will be given to each participant? How will it be announced? How will those who are unable to pay participate? What will be the selection criteria? What will be the procedures? What are the risks? Where will the main bottlenecks be?

For the duration of this technical aid, 5 months, Getafe will answer these questions with the assistance of different local delegations and social agents from affected districts. Once finished, their learnings will be shared through Energy Poverty Advisory Hub, so other cities are able to do the same. 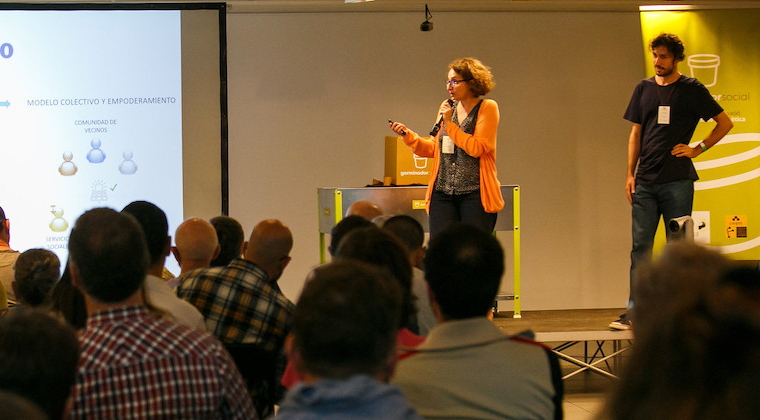 Impulso de Comunidades Energéticas, one of the winning projects from Germinador Social 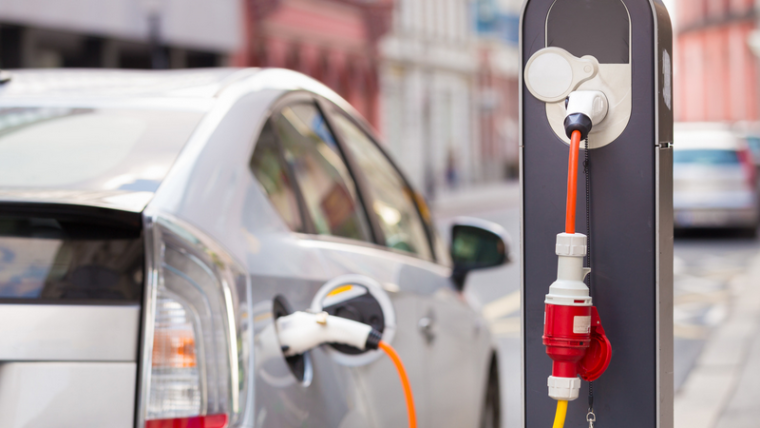